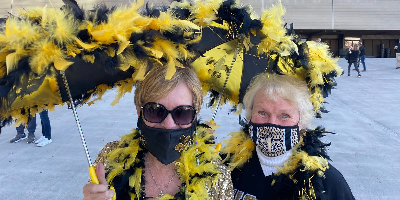 NEW ORLEANS, La. (WVUE) - Today was the first home game where Saints fans were allowed inside the dome. While fans say they were the deciding factor in the win, Superdome coordinators say everything behind the scenes ran seamlessly.

Even with only 3,000 fans, the energy was palpable coming out of the dome, especially coming off of a win against the Carolina panthers.

“It’s so great, like a regular Sunday all over again feels great it’s like my second home,” Tim Branch said.

“It was a blessing it was like something exciting, and I love the Saints, I’m the number one Saints fan,” Valerie Myles said.

For Kenny and Trisha Earskin coming from Texas, this was their first experience inside the Dome, though they say they wouldn’t change it for anything.

“It was the first game back we couldn’t miss it and this is the first of many first many,” Kenny and Trisha Earskin said.