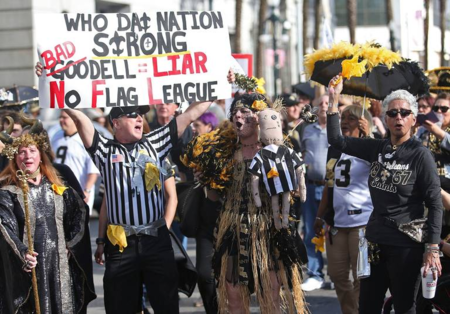 From the back of the bar, a voice bellowed: “Take the three, Sean Payton, don’t be stupid, take the three!”

It was Super Bowl Sunday in New Orleans at the Maple Leaf Tavern on Oak Street. The Maple Leaf is normally a funky, little music bar. But, this day, the stage was converted into a huge TV screen. Fans, almost all decked out in black and gold, cheered and jeered, as the 44th Super Bowl, played nine years ago, streamed on the screen. Payton didn’t take the field goal. He went for it, didn’t make it but he would have the last laugh. So would the fans who jeered him.

Never mind that the 53rd Super Bowl LIII was taking place in Atlanta at that very moment. New Orleans always has danced to its own rhythm and that has never been more true than this past weekend.

Let the rest of the nation watch the Patriots choke off the Rams, New Orleans did its own thing.

In New Orleans, they were calling this “the Boycott Bowl.” If not for a horrible call in the NFC Championship Game, the Saints would have been playing in Atlanta. ...