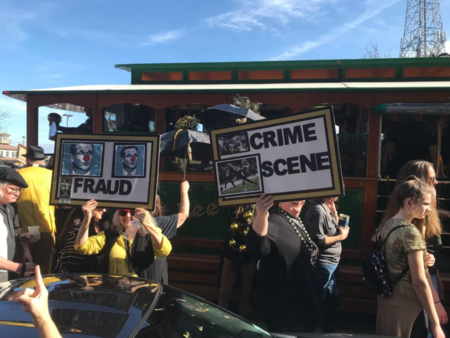 BY IAN MCNULTY AND NICK REIMANN | The Advocate

While two other teams prepared to contend for the Lombardi Trophy in Atlanta, Saints faithful spent Super Bowl Sunday turning New Orleans into a rollicking display of solidarity with their team, mixing the sardonic and the gleeful like so much black and gold.

At grass-roots, fan-led events around the city, New Orleans partied as if the Saints were indeed playing in Super Bowl LIII, refusing to quietly accept the circumstances that kept them from the field.

A parade that began in Jackson Square quickly swamped the French Quarter with a crowd wearing black and gold, plus plenty of revelers costumed as refs. Some blocks were so packed it looked like Fat Tuesday in the Quarter.

A music festival dubbed Boycott Bowl took over a stretch of downtown New Orleans, and many bars, restaurants and clubs did their part. ...