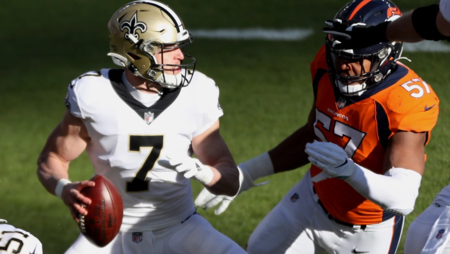 The Saints did not disappoint in their road game against the Broncos, cruising to victory with a dominant ground game.

DENVER -- The New Orleans Saints improved to 9-2 on the season after a dominant road win over the Denver Broncos in Week 12. It was a game that had a bit of controversy leading up to it with the Broncos losing all three of their quarterbacks and having to turn to a practice squad wide receiver who had experience at Wake Forest. Regardless, Sean Payton's offense was dominant on the ground, which helped fuel a win for New Orleans.

New Orleans won the coin toss and elected to defer, putting the Broncos offense out on the field with Kendall Hinton. However, it was Phillip Lindsay who took the first several direct snaps for Denver. Royce Freeman took the other, and Hinton finally entered the game on a short yardage 3rd down situation, but didn't connect.

The Saints got their first opportunity with the ball and ended up going backwards in five plays, which saw a delay of game penalty and sack on Taysom Hill to force a Thomas Morstead punt. ...