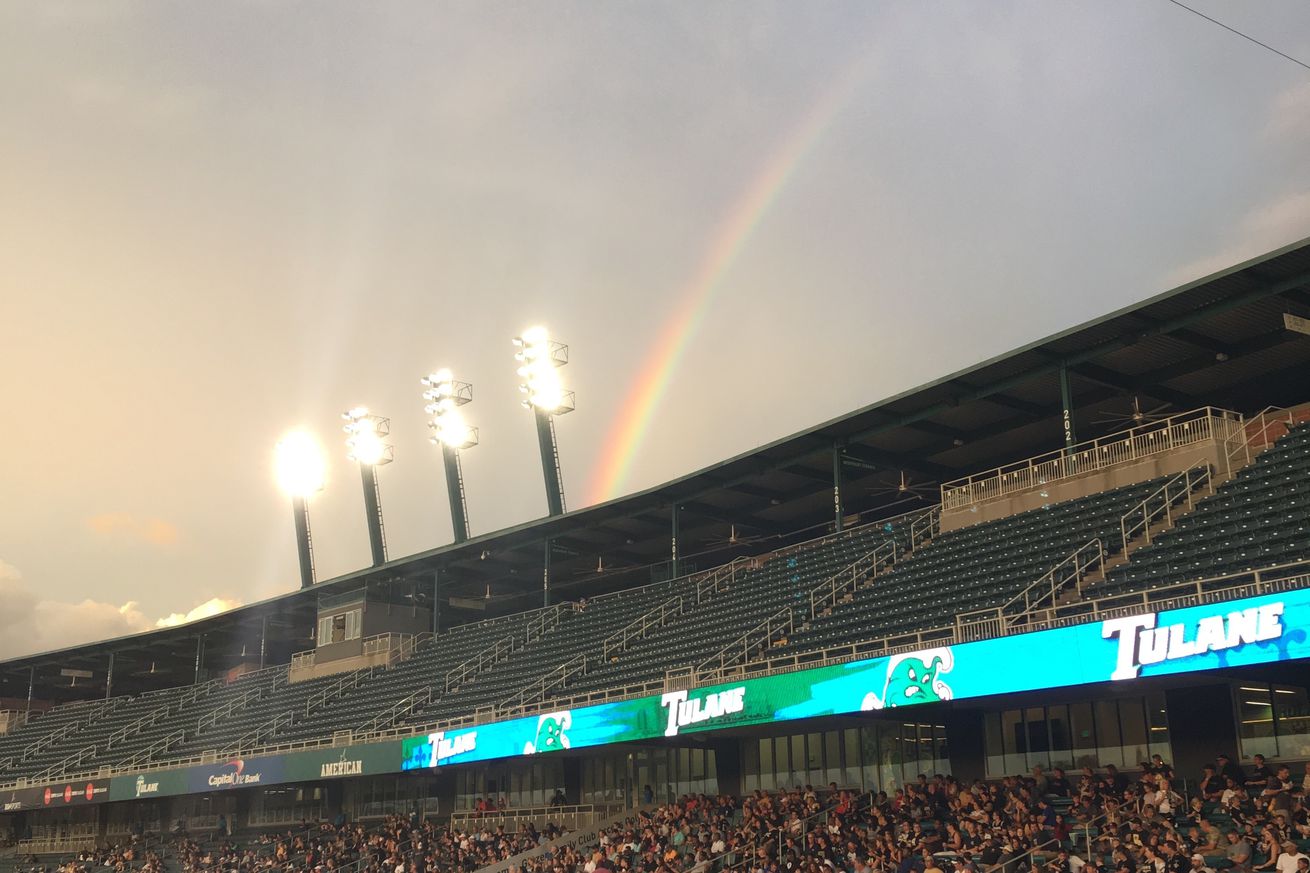 Sunset With a Rainbow Over Yulman Stadium | Monica Charlton
The Saints put on a two hour show this past Sunday in front of thousands of excited fans, and they didn’t disappoint.

This was my fourth straight year attending Saints practice at Tulane’s Yulman Stadium, and it may have been the most enjoyable yet. The weather was absolutely perfect as a rainbow poked out in the distance, following afternoon showers that cut the humidity and gently cooled the crowd.

As always, quarterback Drew Brees was the first player on the field and he immediately began a prophylactic warm up session off on his own. He did squat jumps, side to side lunges, karaoke shuffles, and some lateral stretches before performing different drills implementing quarterback footwork.

He wrapped his arms tightly around his body and mimicked his throwing motion with armless yet powerful torque. He held a towel and performed a dozen quick and motion restricted throws while shuffling his feet like he was stepping up in the pocket. Finally, after 20 minutes or so, he put his pads, helmet, and red number nine jersey on.

He began throwing the football to a Saints staffer from only ten yards away. After a dozen or so throws from there, he stepped back five yards and threw some more, and on and on until he had warmed up his throwing motion up to 30 yards.

By this time, the entire team had joined the field and split up into their separate position groups. The offensive linemen threw weighted balls at one another and practiced proper hand placement on opposing linemen while twisting and turning.

Several notable Saints showed up to practice but remained on the sideline without pads. Among them were star defensive lineman Cam Jordan and aging speedster Ted Ginn Jr. Hopefully both players will be back to full health soon.

As practice got underway, I couldn’t help but notice how well choreographed the whole two hours are. Not a minute is wasted and everyone seems to know where to go and when. The drills don’t need to be explained; the players simply execute each drill seamlessly without pause.

Drew Brees ran the One’s. Teddy Bridgewater ran the Two’s. And Taysom Hill ran the Three’s. Brees had some great throws that were exemplified by great catches. Michael Thomas seemed to catch everything but one pass that I noticed he dropped, though the pass seemed a little off. Thomas looked in shape and just as effective as always despite missing the first part of training camp.

Alvin Kamara looked studly and made several nifty catches and runs. When Kamara did drop a pass from Brees, the two of them played around after and threw the ball a couple more times to one another. It was a playful example of two perfectionists trying to make an imperfect play perfect anyway.

I have to say Drew Brees looks like he’s put on weight, and not in a bad way. His calves look massive and his pads don’t swallow him as much as they used to. I don’t think I’ve ever seen him this jacked.

Perhaps Brees put on some muscle in hopes of taking hits better this season so he can maintain last year’s MVP caliber play through 16 weeks instead of 12. Brees killed it the first three quarters of 2018, but the final month just seemed harder on him. Maybe this bigger physique will help limit that wear and tear, because it certainly didn’t appear to slow him down.

Tre’Quan Smith made several notable catches and looked primed to take hold of the number three wide receiver spot. No matter who makes the final roster at receiver, I’m very excited about this group. There were several times during catching drills when not one player dropped a ball. Consistency was key and even dropsy Dan Arnold caught a pass!

Rookie safety Saquan Hampton had a sweet interception and rookie offensive lineman Erik McCoy appeared to have sewn up the starting position at center assuming he keeps on the same trajectory. All indications appear to show the Saints are willing to give McCoy every chance to enjoy most first team reps.

On defense, no one shined more than linebacker Demario Davis. He pressured Brees more than once, broke up a pass, and caught a deflected one for an interception that could have turned into a touchdown. He looks primed to continue being the best free agent linebacker signing since Jonathan Vilma.

On a less serious note, my new favorite player who I hope makes the final 53 is one I had never heard of before Sunday. Number 58, Porter Gustin, is an undrafted rookie outside linebacker from USC. Well accustomed to a similar 3-4 defensive style in college, Gustin showed tantalizing speed off the edge.

Yet, the red jerseys he rushed always managed to throw the ball just before he got to them time and again. Mostly, I love his short shorts. I’m a Rick Barry, Larry Bird, Magic Johnson era short shorts kind of girl. I’ve been waiting for a player to have the chutzpah to bring them back so I dig Gustin’s style.

At the end of practice, the whole team ran the full length of the field four or five times. Yes, Will Clapp is the slowest as you would expect, but our big boys actually looked pretty spry completing the exhausting cool down drill as one unit.

Once the final whistle blew, droves of fans rushed down to the front of the stands so they could position themselves for a chance at getting player autographs. Many players stayed a while signing memorabilia, taking pictures, and graciously receiving the praise that was being heaped on them from their adoring fans.

Three years ago, Cam Jordan signed my hat and continued to blossom into the dominant defensive end he is today. Last year, Michael Thomas signed my hat and he did the same as a wide receiver. This year, Marcus Davenport signed my latest Saints hat so I’ve got a feeling we can expect some great things from the sophomore first round pick.

Remember when pundits described Davenport’s rookie season as a disappointment because the Saints gave up so much to get him? Selected 14th overall, Davenport made 22 combined tackles, 12 quarterback hits, and 4.5 sacks in his first season. Selected 24th overall, albeit without trading up to select there, Cam Jordan had 31 combined tackles, four quarterback hits, and one sack his rookie year.

His sophomore year, Jordan matured into the player he has been for the past seven seasons by amassing 67 combined tackles, 13 quarterback hits, and eight sacks. Davenport has the template for growth and success in the very same locker room and I wouldn’t be the least bit surprised if #92 takes his game to a whole other level this season.

My last observation was noticing Gayle Benson walk off the field while waving to throngs of fans in the stands. Perhaps she was just being agreeable all those years she rode the golf cart with Tom, because she’s doesn’t need it now. She prefers to hoof it on her own with the cart following needlessly behind her.

The Saints have a more youthful and energetic owner at the helm and that energy permeated the stadium. No one had more energy than Brees, though, as he was engulfed by dozens of children in the end zone. I had to leave because it was late after all and I was getting tired, but I assume Brees was the last to leave, just as he was the first to get there.