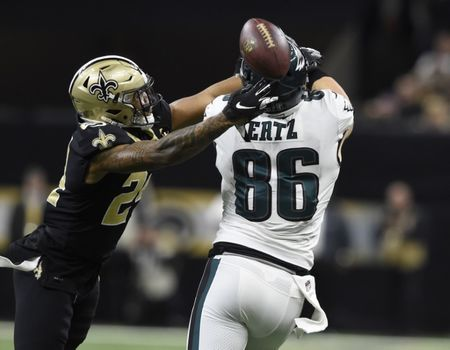 (Reuters) - Comeback kings the New Orleans Saints are hoping a return to the National Football Conference (NFC) title game next weekend will be a lucky charm.

The Saints, who overcame the reigning Super Bowl champion Philadelphia Eagles for a 20-14 divisional victory on Sunday, took home the league trophy themselves the last time they made the conference championship in the 2009 season playoffs.

Drew Brees and company, the NFC top seeds, will meet the Los Angeles Rams in New Orleans next Sunday for the conference title with a shot at football's biggest prize on the line.

The winners of that contest will face the AFC champion team, either the Kansas City Chiefs or the New England Patriots, in Super Bowl LIII on Feb. 3 in Atlanta.

On Sunday in New Orleans, Philadelphia and magical backup quarterback Nick Foles put the Saints in a 14-0 first-quarter hole but the Eagles were unable to get another point on the board.

Brees, the most valuable player in the Super Bowl XLIV triumph, shook off an early interception to throw for 301 yards and two touchdowns.

"We just had to find our rhythm," said Brees, whose team finally took the lead at 17-14 on a two-yard pass from the quarterback to Michael Thomas late in the third quarter.