Offline
This analysis of this Sunday's game is somewhat different and is prompted in part by the Jet fan forums that have declared the Saints as "soft" and the Jets as a "smash mouth" team. Those descriptions seem half right.

The Jets are certainly a smash mouth football team. They win with defense--the middle of their defense looks outstanding; emphasize pressure on the quarterback; and are certainly physical. On offense, their strength is their offensive line. Overall, they are substantially stronger in the trenches than Buffalo was. Their passing game is a work in progress with a rookie quarterback and their receivers as their weakest unit.

The Saints are not a "soft" team and are physical enough to win this Sunday and a championship--if they stay relatively healthy. But we are not a smash mouth team.

So what does this game remind you of? To me, this contest reminds me of the great contests between the Saints and San Francisco in the late 1980s and early 1990s when we had our Dome Patrol defense and San Francisco had more balance and finesse. Again, for me, it's 1990 or thereabouts: The Jets and Ryan are the Saints and Mora circa 1990, and the Saints and Payton are the 49ers and Walsh (though I am not after three games putting us on that Olympian level).

Incidentally, my prediction is Saints, 22-20. I like the Saints to win and the Jets to beat the spread (which apparently opened at Saints minus 4 and 1/2 and has surprisingly jumped to minus 6 or so). The Jets have a better offensive line and front seven than Buffalo. But we will be back at home where wind and a slippery field will not be concerns. It will be all about our offense establishing some rhythm, and the friendly confines of the Superdome certainly help. 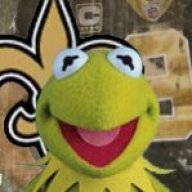 Offline
I am a lot less worried about the Jets now than I was before the Bills game. If we would have had the same passing offense, no run /no defense game against the Bills that we were becoming known for I would not even have hope for the Jets game. . .
However by showing we can grind out a win, run the ball and actually show a little "D" I am starting to have the most dangerous emotion a Saints fan can have - hope.

I am starting to hope that some rushing combined with the Brees bombs can stretch out the Jets defense and get the score up enough for our defense to hold them for a win.

Offline
Good post RJ. The whole physical vs finesse thing can be very stereotypical. Usually teams with good defense are seen as physical and teams that rely on their passing game are seen as finesse.

The Jets do have a good defense. Its a coaching mentality, as you say. Rex Ryan is Buddy's son. My guess is the Jets spend a lot of time and money on that side of the ball. Sean Payton loves his offensive toys. The identity of these teams is very much reflected in their head coaches.

Payton is a smart guy and has recognized that for the Saints to succeed they needed to run the ball better and play better defense. They are doing both. On the defense side it started with the acquistion of Vilma, who is a tackling machine. They got a new coordinator and revamped the weakest hitting secondary in football. The corners are suddenly a strength of this team and the safety play has improved.

The Jets probably do have a more physical defense than we do. They are ranked high and give up few yards. Ours is improving. But we have a more physcial offense than they do. Its not just a finesse offense as some casual followers of the saints might think. I was at the Philly game and saw them push a very good defense around. They ran over Buffalo when they needed to.

The Saints should win Sunday. The biggest difference, aside from what will be a rabid crowd, is Drew Brees v Mark Sanchez. Sanchez has been impressive, but he is a rookie and Brees is the master. Its a huge advantage to the Saints.
Last edited: Sep 29, 2009

Offline
Is their D that good? I mean we-crumple-like-little-girls good? Like what the Ravens do good? How surprised will Jets fans be about how their O line fares against our D, more surprised or less surprised than Bills fans were?

Offline
As long as we don't get forced into 3rd and long situations on a regular basis, this game will not be even close... if we get into 3rd and longs, Drew will be taking chances, and this is not the kind of defense you do that against successfully...if we can keep the chains moving by getting 6-8 yds on b/w 1st and 2nd downs, the Jets will be staring at a 40 burger by the end of the 3rd qtr...

Offline
I really hope the team puts in a lot of time working on screen passes to Reggie, PT and Shockey this week. The screen is the best weapon to use to slow down the blitz and the Jets figure to send a lot of them. Unfortunately the timing has been off on the majority of screens we’ve thrown this year. We’ve never had a problem throwing them in the past so hopefully that’s just a temporary anomaly and we can get back to executing this week.

Online
We absolutely MUST win the turnover battle against the Jets. That's what killed the Titans.
Show hidden low quality content