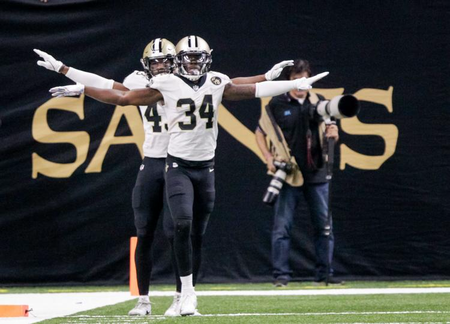 Justin Hardee hadn't intercepted a pass since his senior year at Glenville High School in Cleveland.

So to finally get another one, seven years later, on such a grand stage — the Saints' 43-19 Monday night victory over the Washington Redskins — is a moment Hardee won't ever forget.

Hardee stepped in front of an Alex Smith third-quarter pass intended for Maurice Harris and and returned it 77 yards to the 4-yard line, setting up a Saints touchdown.

"It was surreal," Hardee said. "I didn't think it was real. I thank God for every opportunity and blessing he sends my way."

For the second-year cornerback, this opportunity was a first. He had never taken a snap at cornerback in a regular-season game. He's made his mark more as a special-teams player but was forced into action when cornerback Marshon Lattimore left the game with a concussion in the first quarter. ...