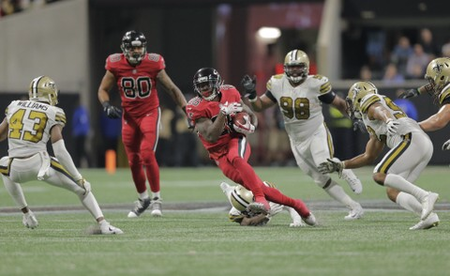 The Atlanta Falcons wish running back Devonta Freeman could play in Sunday's game against the New Orleans Saints.

Freeman, who is out Sunday because of a knee injury, has had more success against the Saints than any other team in his five-year career. In eight games against New Orleans, the quick and powerful Freeman has 602 rushing yards, 296 receiving yards and seven total touchdowns. Those numbers, as well as his yards per rush and reception, are significantly better than his stats against the other NFC South teams.

Without Freeman on Sunday, the Falcons will lean on Tevin Coleman, the fast backup who has had his share of success against the Saints, too. In five games against New Orleans, Coleman has 170 rushing yards, 102 receiving yards and five total touchdowns, four of which came in the Falcons' two wins in 2016. The numbers aren't as eye-popping as Freeman's, but Coleman has averaged 4.4 yards per carry and 10.2 yards per reception against the Saints. ...