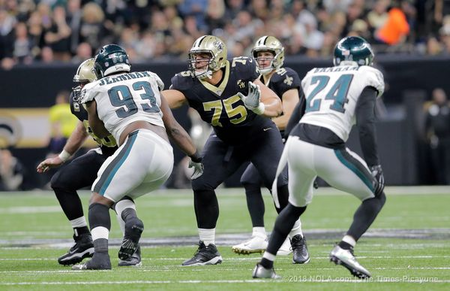 In the New Orleans Saints win over the Philadelphia Eagles in the divisional round, Peat struggled at times as a hand injury impacted his performance. He had four penalties, two holdings and two false starts, but after the game, his teammates were impressed by his gutty performance.

“He’s a fighter,” left tackle Terron Armstead said of Peat. “A lot of guys on our team, that’s just what we do. That’s how we’re made. He’s not somebody that’s going to speak on it or look for sympathy. Whatever he’s dealing with, he’ll fight.”

Peat broke his right hand in Week 17 against the Carolina Panthers, and during the bye week, he underwent surgery, according to sources. Peat had a cast on his right hand when he walked through the locker room during media availability on Wednesday or Thursday of the bye week, and in Sunday’s game against the Eagles, he had a thick wrap on his hand for the game and a bandage over the incision after the game. ...