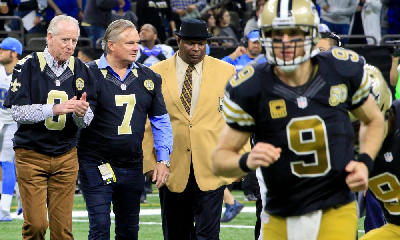 Who has played the most games wearing a New Orleans Saints jersey?

Drew Brees, of course. The Hall of Fame-bound quarterback has taken the field 221 times in black and gold, and counting. He’s both the all-time leader and actively extending his lead, having passed legendary pass rusher Rickey Jackson (195) to claim that team record. You can find the full list at Pro Football Reference, sorted by games played (descending).

But they aren’t alone at the top. Saints punter Thomas Morstead is steadily climbing higher week by week, with 179 games behind him. Four more and he’ll tie the great Jim Wilks for the fifth-most games played for New Orleans. If he sees the 2020 season to its conclusion, Morstead will finish the year with 190 games played — trailing only Brees and Jackson, having passed up Wilks (183), Stan Brock (186), and Frank Warren (189).

Cameron Jordan is another name to watch. The defensive end is on his way to joining Brees and Morstead near the top, though he’s currently tied 1980’s cornerback Dave Waymer at 149 games. Jordan quietly surpassed the always-underrated Marques Colston (146) earlier this year. If he plays in every game this year, he’ll overtake Waymer, Jim Dombrowski (151), and Zach Strief (158).