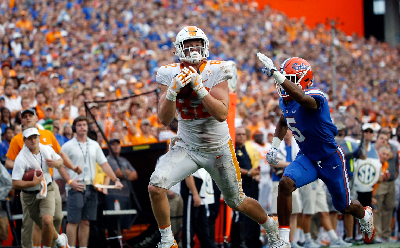 The NFL daily transactions wire included five free agent tryouts for the New Orleans Saints on Friday, and the candidates they brought in were kind of puzzling. But if you dig a little deeper into each player’s history and happenings around the Saints (and around the NFL, where COVID-19 has been making sporadic outbreaks for different teams) then the picture starts to become clearer. Let’s get into each tryout:

Wolf is the most familiar name on the list; he joined the Saints for training camp after an injury to co-starter Josh Hill. A productive pass-catcher at Tennessee during his college career, Wolf hasn’t caught on with an NFL team just yet. New Orleans is still managing co-starter Jared Cook’s return from a groin muscle injury (he played just 53.9% of snaps against the Chargers in his first game back) and has exhausted backup Garrett Griffin’s game-week eligibility to be called up from the practice squad, which could explain their interest in Wolf.

Whichever area scout has been assigned to Tennessee must have liked what they’ve seen. If signed, Wolf would be the fourth Vols alum to join the Saints: running back Alvin Kamara, defensive tackle Shy Tuttle, and wide receiver Marquez Callaway are all waiting on him.