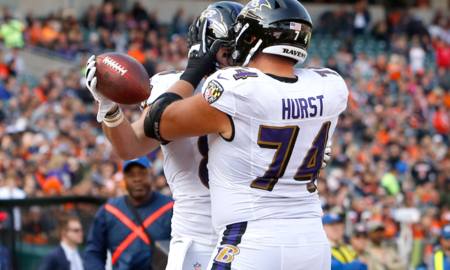 The New Orleans Saints formally reported the signing of offensive lineman James Hurst on the NFL’s transaction wire, with the release of wide receiver Tim White as a corresponding move on the 90-man offseason roster.

Hurst, a veteran backup and occasional starter for the Baltimore Ravens at both left tackle and left guard, agreed to terms with the Saints on a one-year contract earlier this week. He has a good shot at making the team, and could be the backup for left tackle Terron Armstead the Saints have lacked. If nothing else, he has greater NFL experience than his competition.

As for White: he first joined the Saints practice squad last December following a high-profile workout including Antonio Brown, the embattled ex-All-Pro still trying to find his way back into the NFL. White was re-signed on a reserve/future contract after the 2019 season, but undrafted rookie additions pushed him off the roster. The Saints still have a dozen receivers under contract, so his chances of making the squad were slim. ...