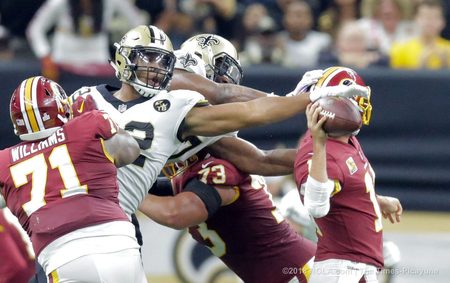 New Orleans Saints defensive end Marcus Davenport had his most impactful performance of his rookie season in Monday's win over Washington.

The first-round pick had three tackles, one for loss, a sack, a forced fumble and a pass defensed in the game, and it's becoming clear that he could be a boon for the Saints defense if his growth continues.

"He's improving each week," coach Sean Payton said after the game. "I was pleased with some of the plays he made tonight. There's some things that we'll continue to work on."

Payton said there's isn't a timeline that would indicate when Davenport will have put everything together, but the Saints are just hoping to see improvement each week.

So far, that's been the case. Davenport now has a tackle for loss in three consecutive games, but more impressive than the statistics is that he seems to be playing with better instincts. ...