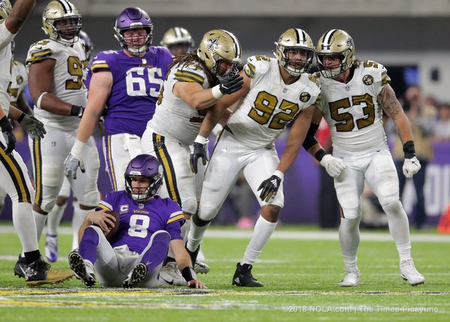 New Orleans Saints defensive end Marcus Davenport walked into the locker room Wednesday with a shoe on his left foot, but he was holding the right shoe in his hand.

He wasn’t wearing a walking boot at the time, but he said he’s still wearing one “a lot,” which explained why he was holding one shoe.

Still, the Saints first-round pick said he’s feeling better after a week off as he recovers from an injured big toe on his right foot, but, for now, he’s still not sure when he’ll return.

“It’s just a day-to-day thing,” he said. “I’m just trying to follow our training staff’s advice and get better each day.”

Davenport suffered the toe injury in the Saints’ Week 8 win over the Vikings. He missed practice all last week and then sat out the Week 9 win over the Rams. He didn’t practice on Wednesday, so it seems like a long shot that he’ll return for Sunday’s Week 10 matchup against the Cincinnati Bengals. ...