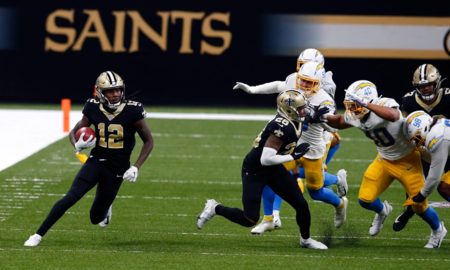 Deonte Harris won every award imaginable for the New Orleans Saints last year. The rookie out of Assumption College earned the NFL punt return yards crown, a Pro Bowl trip, and recognition on the AP All-Pro first team. But when he missed Week 5’s game with the Los Angeles Chargers to a hamstring injury, the Saints were able to put another talented return man in his place.

And Marquez Callaway delivered. The Tennessee Volunteers product (Alvin Kamara affectionately called him, “my Vol brother,” after the game) made the most of his opportunity by returning 6 punts for 69 yards; he lost another 33 punt return yards to penalties. Callaway also brought out a pair of kickoffs for 57 yards of valuable field position.

That means the Saints currently have two of the top eight punt returners in the NFL, by total yardage. Harris ranks second-best with 106 return yards, and Callaway is eighth at 69 (if his other returns hadn’t been wiped out, he’d rank third with 102). That’s 175 punt return yards between the two of them. ...