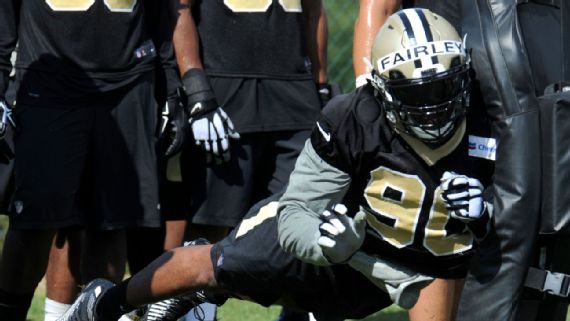 Fairley had a sack and four tackles -- including one where he chased down a receiver across the field on a screen pass. The timing couldn't have been much better, considering Fairley was filling in as a starter for rookie Sheldon Rankins, who had just gone down with a broken fibula earlier in the week.

"He played a heck of a game, and we know he has the talent to change games," Saints defensive end Cameron Jordan said. "He makes a lot of plays in the backfield, and that's exciting. Whether that's sacks, TFLs or just disruption, he's a big, disruptive force."

According to Pro Football Focus, Fairley leads all NFL defensive tackles so far this preseason with a run-stop percentage of 30.8 (four run stops on 13 run defense plays).

"He's athletic. When he wins, he usually wins in the first second of the play. He's pretty quick," Saints coach Sean Payton said. "I'd say that he has a pretty good football IQ. In other words, he's experienced and he's able to recognize schemes, if it's run, what type of run it is. He had some good production in that last game."
Click to expand...

This Payton quote and the one from Cam in the OP have me excited about Fairley and his presence on that DL.

Offline
Fairley ran a 4.81. The guy is quite the athlete in his own right. Long arms, gets nice and low. Dude can and will wreak havoc in backfields.

Dude just needs to cool out with the NOLA food. I'm hankering for some China Doll myself...

St.Dan said:
And I hope he's not a couillon off the field like he was before
Click to expand...

Just going to have to tell him, "Arrête!"

Offline
This could be the perfect storm. A talented player who has shown flashes but never put it all together. He comes to the team he rooted for as a kid, close to home, and on a "prove it" contract. He's in the best shape of his career and appears to be very motivated. Maybe he puts it all together and becomes the beast he was destined to be.

St.Dan said:
And I hope he's not a couillon off the field like he was before
Click to expand...

I have heard and said Couillon all my life, but never knew how it was spelled till now.

I really can't believe Carolina is favored over the Saints tomorrow.