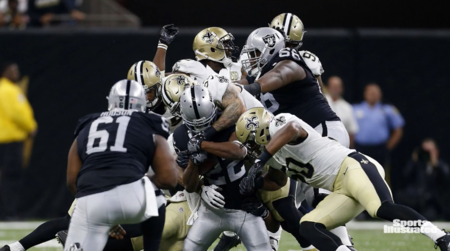 The 1-0 New Orleans Saints travel to face the 1-0 Las Vegas Raiders this week on Monday Night Football. It will be the first road game for New Orleans, who comes off a 34-23 season-opening win at home over Tampa Bay last Sunday. For the Raiders, it will be their first home game in a new city and stadium after a thrilling 34-30 road victory over the Carolina Panthers.

Despite their 34 points, the Saints offense struggled with sloppy play-calling and execution offensively, managing only 271 total yards against the Buccaneers. We should expect a more crisp performance in Week 2 from a New Orleans offense that has typically been among the league's best under coach Sean Payton.

Las Vegas allowed 30 points and 398 total yards against a Carolina team with several new pieces on the offensive side. The Raiders hope for a better defensive performance this season from a unit that ranked 19th overall in 2019 but was 24th in points allowed. The Vegas defense was 31st in turnovers forced (15) last season and did not have a takeaway in Sunday's game. ...