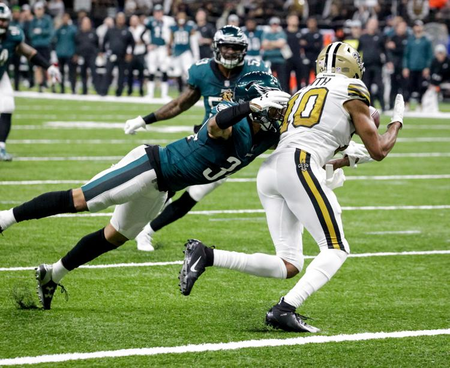 The New Orleans Saints have issues at wide receiver.

One week, the position looks like the biggest problem on the roster. The next, the concerns feel overblown. It’s clear there is an issue. The appropriate level of concern isn't clear, and it varies by the week.

Someone could use last week’s loss at Dallas to create a full-blown panic over the position — but the week before, the big story was about how Drew Brees threw touchdown passes to four undrafted players.

We can safely say things were never better than when Michael Thomas, Brandin Cooks and Willie Snead were running routes for Brees, but the cupboards aren’t as barren as they appeared in the days before the team signed Dez Bryant.

Back then, Thomas seemed to be the only receiver on the field at times, the last man standing after injuries put Cam Meredith and Ted Ginn Jr. on the shelf. That led New Orleans to use rookies Tre’Quan Smith and Keith Kirkwood in more significant roles. While both players have had some promising moments, this isn’t what anyone envisioned back in August. ...