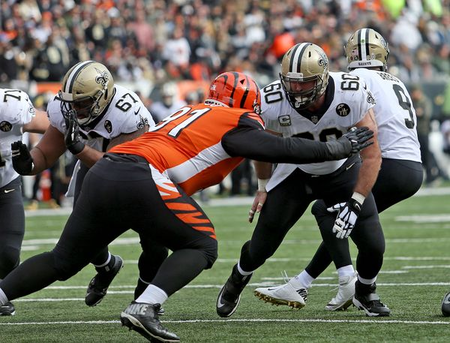 This season has been grueling for New Orleans Saints offensive linemen.

In five of nine games, the Saints offense has played 70-plus snaps, and in the previous five games, the team has faced some of the league’s top defensive lines in the NFL with Washington, Baltimore, Minnesota, the Rams and Cincinnati.

So, for the past two weeks, coach Sean Payton has rewarded some of the Saints offensive linemen with some extra rest.

“The Rams game was one where we backed off of practice the next week,” Payton said Thursday. “Each game there’s a stress and a toll on the front, and I think we’ve played some really good fronts of late.”

After the Saints beat the Rams on Nov. 4, a game with 71 offensive snaps against premier interior linemen Aaron Donald and Ndamukong Suh, all five of the starting offensive linemen were listed on the injury report the following Wednesday, Nov. 8. Larry Warford did not practice with what was listed as not injury related. Terron Armstead (knee), Andrus Peat (hip), Ryan Ramczyk (knee) and Max Unger (knee) were all limited that Wednesday, but it was unclear the severity of their ailments. ...