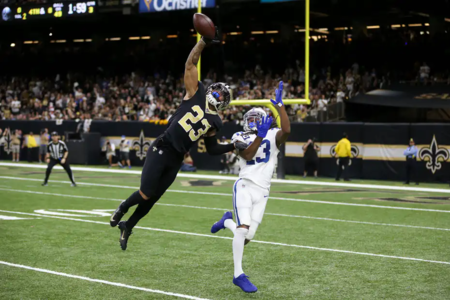 The New Orleans Saints entered the 2019 season with arguably more talent than the franchise has ever had at the cornerback position. After a good first half of the year, the unit tailed off down the stretch. For the year, the New Orleans pass defense ranked 20th in the league and gave up an average of 242 yards per game. This position is swirling with questions as the Saints enter a crucial offseason still in pursuit of their second Super Bowl championship. Today we have a look at the state of the position for New Orleans.

Third-year defensive back Marshon Lattimore earned his second Pro Bowl bid with another standout performance in 2019. Lattimore missed some time with a hamstring injury this season but allowed just 50% completion percentage against his coverage while surrendering only 3 touchdowns and intercepting a pass in 14 regular season contests. The 23-Yr old Lattimore is one of the most complete corners in the game today, capable of locking on to the opponent’s top wideout and taking him out of the game.