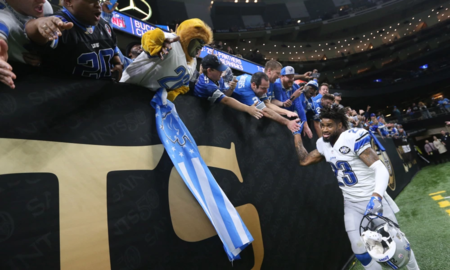 Don’t let anyone tell you that the New Orleans Saints are taking it easy during the offseason. Team leaders like defensive end Cameron Jordan and cornerback Marshon Lattimore are hard at work on Twitter, doing their part to try and talk Detroit Lions cornerback Darius Slay, a three-time Pro Bowler, into bailing on his squad to come chase a Super Bowl ring in New Orleans.

Yeah, that’s not happening. Slay is entering a contract year, and it appears he wants to join Xavien Howard and Josh Norman at the top of the market in the “$15 million per year club.” That’s not a price the Saints are going to pay for a 29-year-old cornerback, especially with Lattimore himself up for a new contract soon (at least the Saints can make things easier by picking up his fifth-year option).

But Jordan isn’t about to let reality get in the way of his dreams. He responded to a Twitter post from Slay advertising a giveaway on his video game streaming channel by jokingly asking if Slay was giving away his “rights and loyalties to the Lions” — and pointing out how much fun it would be for Slay to play alongside Lattimore and Janoris Jenkins, who also goes by Jackrabbit. ...