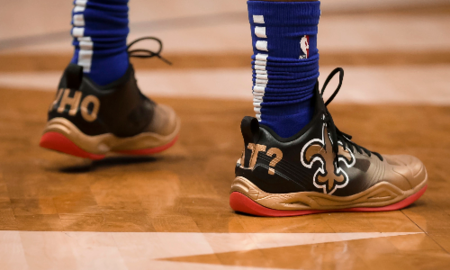 Members of the New Orleans Saints were as shocked as anyone to see their next-door neighbors, the New Orleans Pelicans, win the top selection in the 2019 NBA Draft Lottery — and the surefire first overall pick, former Duke superstar Zion Williamson. At 6-foot-7 and 284 pounds, Williamson is the rare basketball player built more like a football star. On some level, Saints coach Sean Payton and quarterback Drew Brees have to be wishing he’d be up for becoming a two-sport sensation.

Saints players were quick to react on social media, congratulating the Pelicans and team owner Gayle Benson (who owns both the Pelicans and the Saints) on this big win. Some players also saluted new Pelicans executive vice president David Griffin on the upset — New Orleans went into the lottery with just a 6-percent chance of securing the top pick. Others questioned longtime centerpiece Anthony Davis on whether or not he’d like to reconsider the trade demands he made earlier this year.