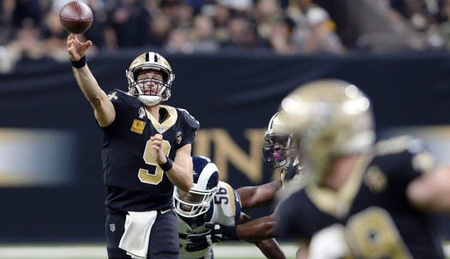 The Saints last week reached the halfway point of their season by taking down the undefeated Rams and lifting up the incomparable Drew Brees as front-runner for the first MVP award of his record-blasting 18-year NFL career.

At least that’s how it looks from here with half a season to go.

For some other perspectives, a few Vikings were asked Wednesday to pick the player they think will win the Associated Press’ 62nd NFL MVP award. As you might guess, a certain rags-to-riches teammate was the most popular choice.

Both certainly are in the mix. But the process used here to pick the MVP at the midway point included where each team sits in its division.


Since there’s never been an MVP from a team with a losing record, players on 19 teams without a winning record were eliminated. No Eagles. No Rodgers. ...