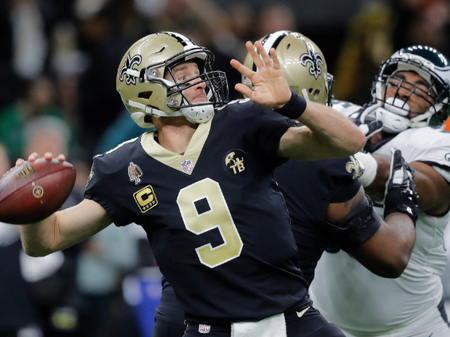 NEW ORLEANS — When the New Orleans Saints finally found their rhythm, they marched one step closer to the Super Bowl.

Using a dominant ball-control offense and a few gambles that paid off, the Saints got two touchdown passes from Drew Brees and two interceptions from Marcus Lattimore in a 20-14 victory over the Philadelphia Eagles.

Brees took the Saints on scoring drives of 92, 79 and 67 yards after falling behind 14-0. Lattimore clinched it when Nick Foles’ pass from the Saints 27 deflected off usually sure-handed receiver Alshon Jeffery with about two minutes remaining. A couple dozen Saints players surged off the sideline toward the end zone in celebration, while Jeffery fell face-first to the turf in agony.

New Orleans (14-3) will host the NFC title game next week against the Rams (13-4). Los Angeles, which fell 45-35 at the Superdome in November, will try again next week, with the winner going to the Super Bowl. The Saints’ win finished off a sweep of the divisional round by teams coming off byes. ...