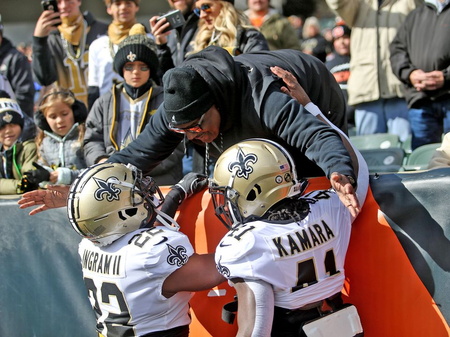 CINCINNATI — The first touchdown of many for the New Orleans Saints on Sunday (Nov. 11) was a piece of football art, a throw threaded through a tiny window, a sprawling catch secured by strong hands.

The brilliance put on display by Drew Brees and Michael Thomas on that play hinted at the greater things to come for the Saints in their 51-14 blowout victory. That play signaled that the Saints brought their best with them to Paul Brown Stadium, flawless execution that made anything seem possible on the field. Sunday, it felt like the Bengals never really were there.

For the second consecutive week, New Orleans hung 35 points on the scoreboard before halftime. Driven largely by the excellence of Brees, who completed 18 of his 20 first half passes, each of the Saints first five possessions resulted in a touchdown. By the time the third quarter came to a close, the Saints had already amassed 456 yards of total offense. ...