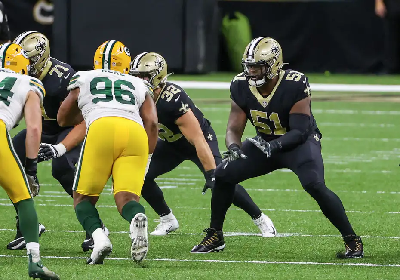 The New Orleans Saints entered the 2020 season with perhaps the deepest roster of talent in the NFL. That depth has been tested during the team's 3-2 start, as the Saints have had to withstand injuries to starters Michael Thomas, Deonte Harris, and Andrus Peat offensively and Marcus Davenport, Marshon Lattimore, David Onyemata, and Janoris Jenkins on the defensive side.

With such strong depth at nearly every position, New Orleans didn't necessarily expect major contributions from their rookie class in 2020, perhaps aside from first-round pick G Cesar Ruiz. Although their rookies have not had a major impact yet this season, several of them have played increased roles through the first five games.

Here is what we've seen from the Saints rookie class through the first third of the season.

Ruiz, the 24th overall selection out of Michigan this spring, was expected to open the season as a starter at right guard before a late preseason injury slowed his development. As a result, veteran Nick Easton earned the start on opening day. Ruiz saw his first action of the year in a Week Two loss at Las Vegas, playing just six snaps. He’d get more playing time against Green Bay in Week Three, 51 snaps when an injury to Andrus Peat knocked him from the game. Peat’s injury forced him to miss the fourth game against the Lions, giving Ruiz his first start.