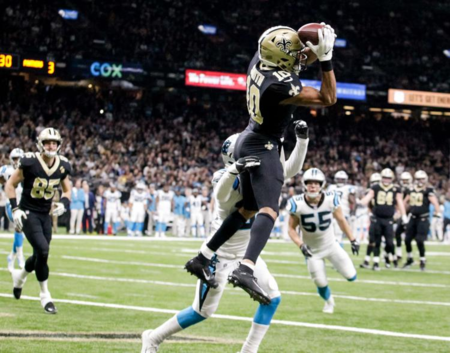 Tre’Quan Smith remembers coming in after training camp and seeing where his name sat on the depth chart.

The Saints rookie wide receiver made plays throughout the summer, often flashing the kind of speed and catching ability that creates excitement during training camp, but he understood why his name was penciled well down the depth chart.

Smith knew Michael Thomas, Ted Ginn Jr. and Cam Meredith should all be playing ahead of him. He still had a lot to learn. Then Ginn got hurt, and so did Meredith.

Suddenly, Smith was the No. 2 receiver in an offense devoid of weapons.

“Next thing you know I’m up and Ted’s down and Cam’s having to go through surgery,” Smith said in January. “No one would have known that. I didn’t know that. (Wide receivers coach Curtis Johnson) always told me to be prepared. At an early start, I got a lot of weight put on my shoulders.” ...