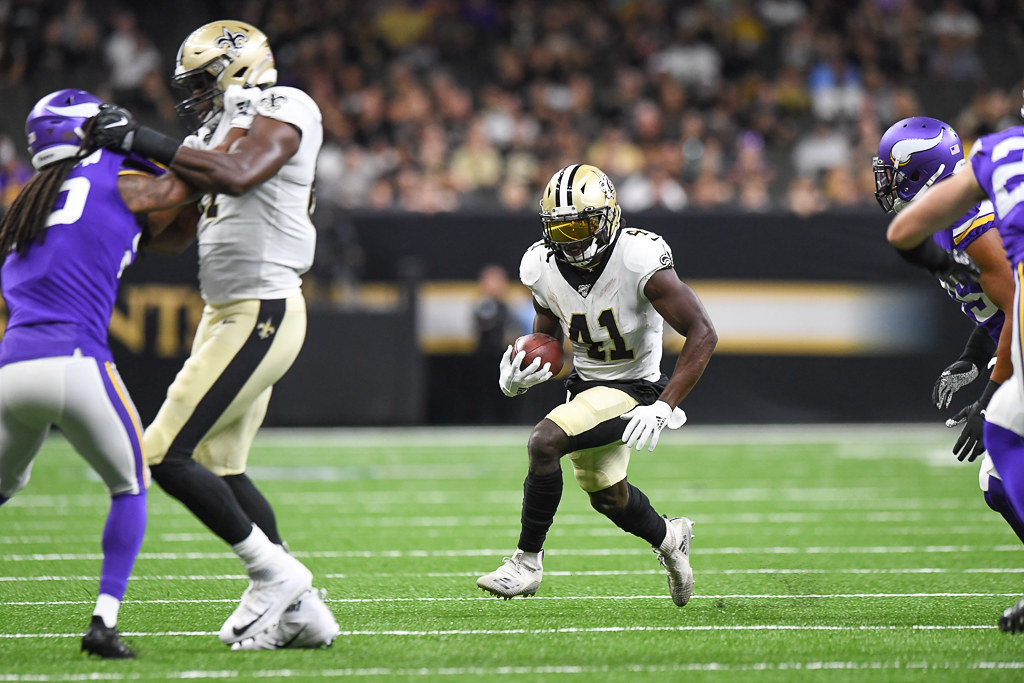 The Saints didn’t display midseason form in initial preseason matchup against the Vikings, but no one expected that. However, the New Orleans ground game showed some of its great promise as a group.

Gaining 141 rushing yards in the exhibition contest Saturday, the Saints had their total boosted by the scrambling exploits of quarterback Taysom Hill, who paced the attack with 45 yards on six totes. Dwayne Washington added 36 yards and undrafted rookie Devine Ozigbo represented himself well in three carries for 20 yards. The top tandem of Latavius Murray and Alvin Kamara chipped in with 14 yards and 11 yards, respectively. The newly-added Murray flashed good mitts as a receiver with three catches.

At least from a personnel standpoint, this season will be different. The Batman and Robin duo of Kamara and departed free agent Mark Ingram is no more. Kamara has been a star in the league in his two pro seasons though. While his usage likely increases, Murray will have every chance to fill the void left by Ingram’s relocation to Baltimore.

Saints running backs coach Joel Thomas, now in his fifth season on the staff, has had plenty of talent in his position group. With Thomas’ help, Ingram earned a Pro Bowl spot in ’17 while Kamara has made the past two Pro Bowls.

Ingram finished his days as a Saint 90 yards shy of becoming the franchise’s all time leading rusher. He ran for over 1,000 yards in both of his final two seasons with the Black and Gold.

Training camp has been focused on a variety of options to provide depth behind Kamara and Murray. However, all signs point to Kamara as the prominent runner – and even more so in his third pro season than before – in what will always be a shared backfield to keep backs fresh and utilize their strengths.

“The role is who is going to complement A.K. (Kamara),” said Thomas. “It may not be one person. We’ve got Latavius who is a big body who can handle some of the heavy load. But at the same time, he’s being asked to do a little bit more than he did in previous offenses in the passing game.”

The third running back last season was Dwayne Washington, and it appears he’s favored to resume that role.

“Dwayne has had a nice camp so far running the ball, playing big boy football. Being a year in our system, he didn’t have the luxury of a camp (in 2018). He came in fresh out of Detroit and had to learn the offense game by game.”

Besides producing yards as a runner, all Saints backs are called upon to pass protect and be prepared to be a reliable receiver out of the backfield.

“You’ve got to do everything in this offense,” Thomas explained. “That’s a lot on your plate, but that’s why (Kamara), who can do all of those things, is one of the better backs in the League.”

Thomas recognizes a unique talent in each one of his potential running back options for the upcoming regular season.

“Murray runs heavy. He’s a smart player. He knows how to play within our system in regard to what we ask him to do. “Washington is a heavy, heavy runner downhill. He’s got some speed that some people may not notice. I’m excited for what he can do. He can break into the open.”

One rookie newcomer who could break into the mix is Devine Ozigbo.

“Young and upcoming prospect. It’ll be interesting if he can continue to play with leverage and his pads down. The first challenge at this level is that the game is a little quicker. He’s smart, he can adapt,” noted Thomas.

Ozigbo ran a 4.5 forty on Pro Day at Nebraska with a 37″ vertical. Very physical with strong legs, the 230-pounder has good contact balance and gains yards after contact. Ozigbo also show surprising burst through the line and speed to turn the corner for a runner his size. Chris Ivory, Khiry Robinson and Pierre Thomas made the squad in the past as undrafted free agents so Ozigbo would not be a shocker is he became another hidden gem unearthed.

Jacquizz Rodgers has not been around training camp for long but the nine-year veteran can fill many roles.

“Aa Jack of All Trades. He can pass protect. He can catch. He’s got that stature and size you’re looking for. He can run inside the tackles. It’s good to have him in our room,” Thomas said of Rodgers, who had 38 catches for the Buccaneers in 2018. In 2012-’13, the Oregon State product caught over 50 passes in both seasons with Atlanta.

Like Rodgers, seven- year veteran Kerwyn Williams was added to the mix late last week. He is a third down type back with return skills. Williams has averaged over 19 yards per kick return for his career.

There are no sure things thanks to competition and the chance of injuries but most expect the Saints to carry three tailbacks with fullback Zach Line on the final 53-man roster. However, we’re not there just yet.