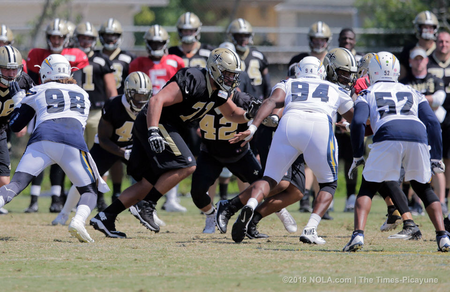 COSTA MESA, Calif. -- New Orleans Saints right tackle Ryan Ramczyk had a stellar rookie season, but he has no problem admitting an understandable flaw from his first NFL campaign.

A first-round pick last year, Ramczyk said he spent the year primarily focused on his technique and doing what the coaches asked of him, but as he prepares for his second season, he's starting to understand the more cerebral aspects of playing offensive line in the NFL.

"Now it's like, OK, it is a chess match," Ramczyk said Thursday (Aug. 23) after a joint practice with the Los Angeles Chargers. "The defensive end sees this, so I give him this; he does this, so I do that. It really is turning into kind of a mental game. I kind of see myself growing with that and picking that end of the game up." ...