meily said:
…so developing players like Calloway, Harris and LJH is not exactly a shot in the dark hoping they turn out to be players considering the production of players like Colston, Henderson, Moore and Graham in this offense.
Click to expand...

I get it, but you just named 4 players over the last 50 or so years that have out-performed their draft position (or lack there of). Throw Willie Snead in there as well… then subtract all of the players that exceeded expectations with Drew Brees as their QB…
…that’s ALL of them right?

Drew Brees is gone… and as much as Saints fans want to believe Winston or Hill will just (all of the sudden) “click” and be like Brees was are mistaken. Maybe Winston does have “it” and he is really good for the Saints… it’s not going to look like (or be like) when Brees was doing it. Drew Brees really did make receiver look better than perhaps they were.

Winston (and/or Taysom Hill) are not going to be able to elevate the talent of their receivers like Brees did.

Either player needs truly gifted weapons at their disposal.

Lucky for the Saints, they currently have a really good OL, and legit playmakers in Alvin Kamara, and Michael Thomas… along with promising potential in guys like Harris, and even TQS, Callaway, and Taysom Hill (wildcard Juwan Johnson).

The weapons are there, and the line is borderline great… when everyone is healthy. Problem is they haven’t been healthy together yet…

It’s exciting… I just hope things don’t bottom out before everyone gets back… because it could be great. 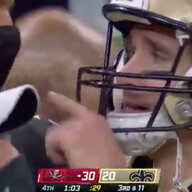 nakadish said:
The Packers were terrible in Game 1. If they played Game 1 like last week, the Saints are 0-2.
Click to expand...