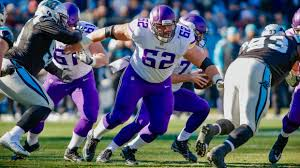 METAIRIE, La. -- The New Orleans Saints have a new leading contender for their starting center vacancy.

The agreement comes one day after news broke that the Saints' Pro Bowl center Max Unger is retiring, and the Saints plan to play Easton at center, according to the source. Easton, 26, missed all of last season because of surgery to repair a herniated disk in his neck. But he started a total of 17 games at both guard and center for the Vikings in 2016 and 2017.

The 6-foot-3, 303-pounder began his career as a popular undrafted center out of Harvard in 2015. He originally signed with the Baltimore Ravens, then was traded to the San Francisco 49ers that September and traded to the Vikings that October. ...