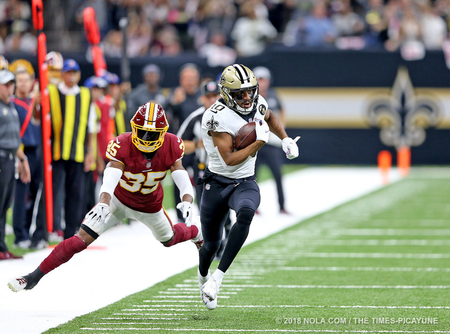 The New Orleans Saints have mixed up their wide receiver usage for much of this season, but in Week 5, rookie Tre'Quan Smith was the clear No. 2 option.

Smith played 44 of 66 offensive snaps (67 percent), which was a career high by a significant margin. With the extra playing time, Smith had a monster game with three catches for 111 yards and two touchdowns, including the 62-yard touchdown that made quarterback Drew Brees the NFL's all-time leading passer.

Smith earned extra playing time with Ted Ginn Jr. (knee) missing the game. The Saints view Smith as their second best option on deep routes, so it was natural for him to fill in Ginn's role in the game.

Through the first four games, Smith's season high was 26 snaps, which he played in Weeks 3 and 4. His high percentage was 37 percent last week against the New York Giants. ...