Saints TE Dan Arnold went into the offseason distraught but came out stronger: 'It's like night and day' (1 Viewer) 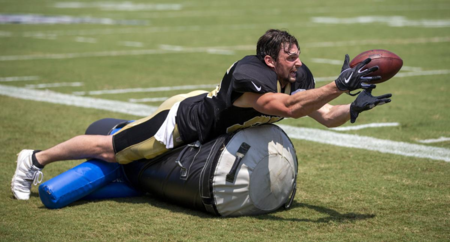 By Nathan Brown | The Advocate / Picayune

So many things could have gone a different way, but Dan Arnold knew he could have been the difference.

On Jan. 20 in Superdome, hours before the controversy, the overtime and the game-winning field goal that sent Saints fans from irate to nervous to just plain dejected, the second-year tight end dropped a potential touchdown pass on third down, a ball placed by his future Hall-of-Fame quarterback in a spot only Arnold could reach.

After the 26-23 loss to the Los Angeles Rams in the NFC championship game, the former Division III standout wide receiver at Wisconsin-Platteville was all but inconsolable at his locker.

“That’s one play that’s gonna sting hard," he said after the game. "I feel like, you know, you let your team down more than anything. You weren’t strong enough for that moment. Those are the kind of things that are going to define you. That feeling sucks. I never ever want it again in my life. From here on out, it’s how you respond, it’s what matters most.”...