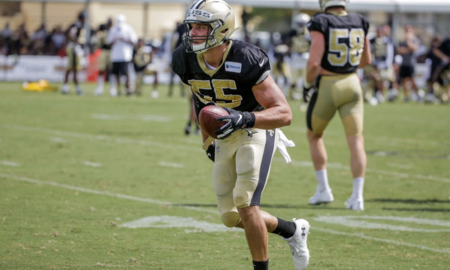 It turned out to be a short stay on reserve/COVID-19 for New Orleans Saints linebacker Kaden Elliss, who was designated to the reserve list Thursday. NewOrleans.Football’s Nick Underhill reported that the Saints will remove Elliss from the list after twice testing negative for COVID-19, which was confirmed by Amie Just of The Times-Picayune/Advocate. It suggests that the initial test result to put Elliss in the NFL’s COVID-19 protocol may have been a false-positive, but the real takeaway is that Elliss was fortunate to escape a serious infection.

That’s great news for the second-year pro out of Idaho, who was picked by the Saints late in the 2019 NFL Draft. Elliss initially showed out on special teams in training camp last summer before working his way into the linebacker rotation, splitting time with Kiko Alonso as the team’s third linebacker in base sets (starters Demario Davis and A.J. Klein rarely left the field). An unfortunate knee injury in Week 3’s road win over the Seattle Seahawks ended his rookie season, but he’s back now and looking to carve out a larger role for himself. ...