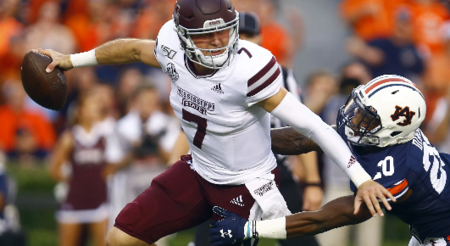 With Teddy Bridgewater now a member of the Carolina Panthers and Drew Brees coming back for just one more season, it appears Taysom Hill is next in line to be the full-time starter for the New Orleans Saints. While Hill has become a fan favorite due to his ability to run, pass and throw, and reports surfaced earlier this offseason that the Saints are actually confident he can be a franchise quarterback in this league.

Hill is just one of the versatile players who has seemingly opened the door for other "jack-of-all-trade" players. Just last year, Baltimore Ravens quarterback Lamar Jackson won the MVP award -- a former No. 32 overall pick who many analysts wanted to play wide receiver in the NFL.

One player specifically feels like Hill may have opened the door for him -- and he will now share a quarterback room with him. With the No. 240 overall pick in the 2020 NFL Draft, the Saints selected former Mississippi State quarterback Tommy Stevens. This wasn't just a pick for fun, by the way. The Saints actually traded a future sixth-round pick to the Houston Texans to select Stevens -- and it was the only pick they made in the final four rounds. ...