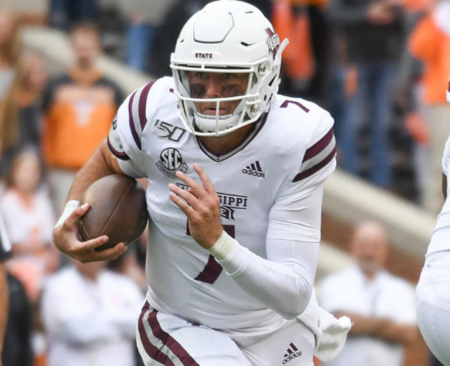 Most people would argue you can never have too much of a good thing. For a pair of NFC South rivals, this ideology wiggled its way into the conversation during the 2020 NFL Draft.

Coming into the draft, the New Orleans Saints and Carolina Panthers boasted solid -- and if you're talking Drew Brees, really solid -- options at the game's most important position. But that didn't stop either from looking into the possibility of adding one more QB. In fact, both war rooms were so intrigued by that notion that they engaged in a bidding war for the same guy: Mississippi State's Tommy Stevens.

"(The Panthers) felt like they had him signed, sealed and delivered," Saints assistant GM Jeff Ireland said on the team's official podcast Monday, via The Athletic's Jeff Duncan. "[Stevens' agent Buddy Baker] wasn't really talking to us, so we just decided we'd just go take him from them. ... There's a little bit of competitive juices flying between me and Sean [Payton] about, 'We want this player. We're not going to let anybody take him from us.'"

After dealing their remaining picks on Day 2, all the Saints could do was wait to wade in the undrafted free agent pool at the end of Day 3 in search of some diamonds in the rough. Until they saw all 6-foot-5, 237 pounds of Stevens still available as Round 6 concluded. ....