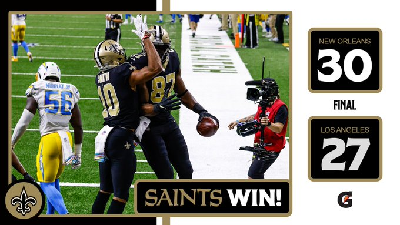 Brees did enough to hold off Justin Herbert, who threw four touchdown passes
in a losing effort

Brees' heroics were enough to defeat the Chargers and rookie quarterback Justin Herbert, who threw four touchdown passes, including two to Williams. Despite his performance, the Chargers have now lost four one-score games this year after losing nine such games in 2019.

The Chargers struck first when Herbert hit Keenan Allen on a 17-yard touchdown. The Chargers, who missed the extra point, received a 36-yard run on the drive by running back Justin Jackson. Allen, however, was unable to finish the game after sustaining a back injury in the first half. The Saints, following a sack by Saints defensive end Trey Hendrickson, started their third possession on the Chargers' 48-yard-line. The short field helped set up the Saints' first score, a 48-yard field goal by Lutz.