Saints Will Wait to Name a Starting Quarterback (1 Viewer) 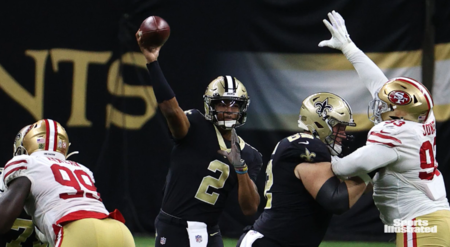 Drew Brees' MRI and X-Rays on Monday showed multiple fractured ribs on each side and a collapsed lung, per Ed Werner. While no timetable has been set for Brees' return, the early indications are for him to return after 2-3 weeks without being placed on the injured reserve list.

New Orleans found themselves in a similar situation just a year ago when Drew Brees suffered a UCL tear in his right thumb, forcing him to miss five games. In his absence, Teddy Bridgewater, now the starting QB for the Carolina Panthers, led the Saints to five consecutive wins and won the hearts of the Who Dat Nation in the process.

In 2020, there is no Teddy Bridgewater to save the day. Instead, Jameis Winston navigated the Saints to victory following Brees' departure from the Week 10 matchup against the 49ers. However, his performance has yet to earn him the starting nod for Week 11 from Sean Payton. The long-tenured Saints Head Coach told local media that "[there are no] benefits us by announcing that player earlier than later." on Monday. ...