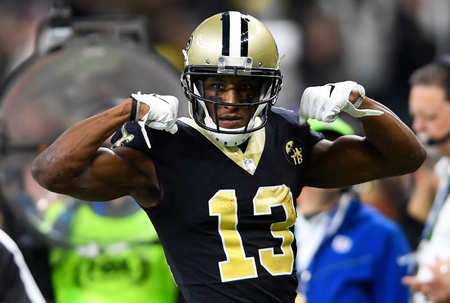 Michael Thomas caught more passes than anyone in the NFL this season. The Saints threw 163 footballs in his direction. He caught 137.

He played at Taft High. UCLA is 15 miles away. USC is 25. The recruiters drove the 101, right past his exit, seeking someone bigger and faster.

Keyshawn Johnson, perhaps the most flamboyant receiver in Trojans history, is Thomas’ uncle.

“If Keyshawn can’t convince USC to take him, I don’t know who can,” said Matt Kerstetter, then the coach at Taft.

Thomas fell through their cracks and into heaven. Next time someone asks you what’s happened to Pac-12 football, think about him.

Thomas turned 12 catches into 211 yards when the Saints beat the Rams 45-35 on Nov. 4. They meet Sunday for the NFC Championship. The Rams will try something different, but it’s the same secondary and the same Thomas. He has been scheme-proof so far.

“He’s grown up a lot,” said Mike Thomas Sr., known as Big Mike, a real-estate agent who has walked his son, and driven him, on this uphill journey. “But even when he was small, all the way back to Pop Warner, he never dropped the ball. You throw it to him, he’ll catch it.” ...