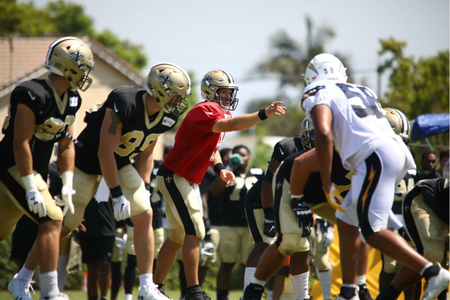 Costa Mesa, Calif. - The New Orleans Saints and the Los Angeles Chargers practiced jointly for the second consecutive day at the Jack Hammett Sports Complex. Thursday's 90-minute practice drew another large crowd under cloudless skies and temperatures in the low to mid 80s. The Saints and the Chargers started practice in helmets and shoulder pads and then shed the shoulder pads for the full team periods. Here are some observations:

The Saints' secondary enjoyed a better day working against Chargers quarterback Philip Rivers and his receivers. Instead of victimizing Drew Brees, Marcus Williams took one away from Rivers on Thursday. Williams has given Brees fits several times during this training camp. It was good to see him translate that to another team's quarterback. Saints cornerbacks Justin Hardee and Ken Crawley both nearly had interceptions, too. Their pickoff attempts weren't secured going to the ground, but were still solid pass breakups.

Keep an eye on wide receiver Austin Carr in Saturday's preseason game. Carr was acquired last year by the Saints, and is now making a strong push to be the fifth wide receiver. Carr has been very reliable during this stage of camp, and continued to line up in the slot with the first-team offense for some snaps Thursday. ...