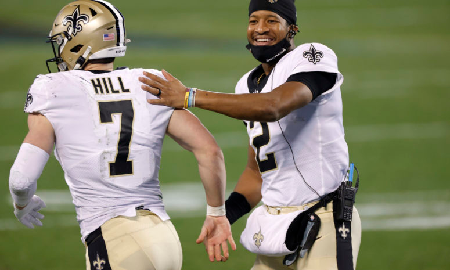 By Dan Lyons | The Spun

With Drew Brees officially retired as of March, the New Orleans Saints have a major question at quarterback, with two very different potential answers. There’s Taysom Hill, something of a gadget player, who went 3-1 as a starter in place of Brees in 2020, and Jameis Winston, the former No. 1 pick.

Hill is certainly the more fascinating option. His experience as an NFL quarterback is still very limited. He entered the season just 6-for-13 as a passer. This season, he did impress in a larger role, completing 88-of-121 throws for 928 yards, four touchdowns, and two interceptions.

While Hill brings a dangerous rushing dynamic and is obviously loved by head coach Sean Payton, Jameis Winston may have the higher ceiling as a pocket passer with a glowing pedigree, and much more experience as an NFL quarterback.

Payton appeared on The Rich Eisen Show on Wednesday and certainly made it seem like he wants to have a true QB1, and not try and carve out a two-quarterback system for the two New Orleans Saints quarterbacks this fall.