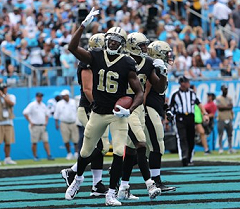 Released earlier in the day after failing a physical, wide receiver Brandon Coleman was not present for a practice under the lights at Yulman Stadium with the New Orleans Saints on Sunday night (Aug. 5).

But coach Sean Payton did not rule out a return for Coleman once he recovers from injuries to his neck and hip.

"He's got a little bit of time still in his rehab," Payton said. "He'll be able to go ahead and rehab and get healthy. I would anticipate that it's not the last time we'll see him. He and I had a good visit today, we're all on the same page."

Coleman started training camp on the active/physically unable to perform list. His release, combined with the release of offensive lineman John Fullington, opened a spot on the 90-man roster for the Saints to sign tight end John Phillips and safety Rickey Jefferson. ...