Offline
Found this on Football Outsiders and thought some of you would find it interesting. It's from the 2006 season and breaks down a screen play during the Saints-Cowboys game.

I think it's important because it discusses how this play is not only important because it gained yards, but it also prohibits the defense from flying up the field every time they sense a short pass or screen coming. Screens and short passes are a big part of our offense and I'm sure SP still runs plenty of plays that serve the same function as this: to gain yardage, but to also put the defense in a position that compromises their ability to react quickly to what they're reading in the offense.

When the Cowboys faced the Saints in Week 14, they used a lot of man coverage and five-to-six man blitzes. The Saints countered with lots of screens and passes into the flat. By the Saints' third possession, the Cowboys were ready to sniff out and defend those screens. But they weren't ready for the double-fake that Sean Payton threw at them. 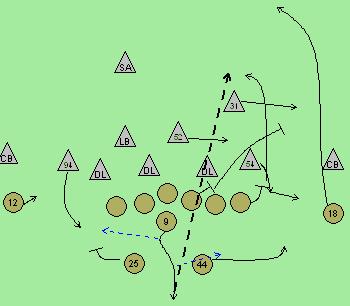 The above figure is complicated, so let's tiptoe through it. The Saints formation is simple enough. The Cowboys are in their base 3-4 defense, which is really a 5-2 because Demarcus Ware (94) and Bobby Carpenter (54) are usually on the line. The situation: no score, first-and-10 on the Cowboys 21-yard line. At the snap, Brees takes a three-step drop. Reggie Bush (25) stays in to block the blitzing Ware. Tight end Mark Campbell (80) blocks Carpenter. Brees turns to Marques Colston, who jab-steps then turns. Screen, right? Nope. Brees pump-fakes to Colston, then turns 180 degrees counter-clockwise while drifting back two more steps.

Mike Karney released into the flat at the snap. Right guard Jahri Evans slipped out to the second level to block for a screen. Brees pumps to Karney. This is the fake that truly fools the Cowboys. Carpenter disengages to chase Karney. Roy Williams (31) steps up to stop Karney. Bradie James (56) starts to chase Karney. But Karney doesn't have the ball, and he isn't getting it. Brees takes two more steps back and sets. Campbell leaks into the hook zone. There are no defenders near him when he catches a short toss from Brees. He gains 14 yards before a safety tackles him.

The other screens were relatively simple; this play is complex. It requires precision execution by Campbell, who must sustain his block long enough to fool Williams, his coverage defender. Bush must survive his encounter with Ware (he does well, aided by the fact that Brees keeps moving behind him). Evans must convince Cowboys defenders that he is blocking a screen. The pump fakes must freeze both the coverage and the pass rush. But when a play like this works, it doesn't just net 14 yards. It forces the defense to think twice before selling out on passes to running backs. For a team like the Saints, who count on Bush and the others for a big part of their passing game, a little defensive reluctance goes a long way.
Click to expand...

Difference in offense between Pete Carmichael and Sean Payton

Payton Turner: Did I expect too much, too soon?
2 3