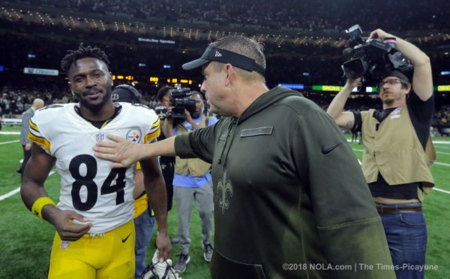 INDIANAPOLIS — The New Orleans Saints would seem to be looking to add an offensive playmaker this offseason, but coach Sean Payton said Friday (March 1) the team has not yet reached out to the Pittsburgh Steelers about star wide receiver Antonio Brown.

“No, and I wouldn’t tell you if we had,” Payton said in an interview with New Orleans media members at the NFL combine. “Look, I’ve followed it a little bit like you guys have, and that’s really about it.”

Brown has requested a trade, and the Steelers have said they will look to move him this offseason. The 30-year-old receiver is a four-time All-Pro, has averaged 114 catches for 1,524 yards the past six seasons and likely would improve any team he joins immediately. ...

Where are Cardinals, Chargers, other potential Sean Payton suitors picking in 2023 draft?