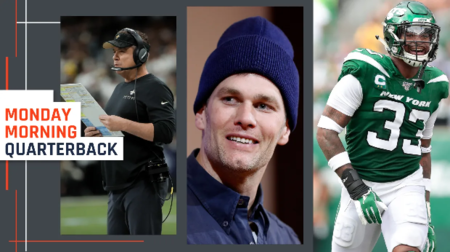 Saints coach Sean Payton has been the NFL’s most prominent coronavirus patient.
He opens up about what it was like, how his plasma donation has made a difference
and what he likes about the Saints’ offseason plans. Plus, producer Gotham Chopra
talks all about Tom Brady's upcoming documentary—and why it’s not The Last Dance

Sean Payton’s pretty recognizable on the Gulf Coast, so being stopped by someone isn’t the rarest occasion for a guy who’s been the Saints coach for a decade and a half. But there was a point in April when all of us knew less about COVID-19 than we do now, where his recent history—having had COVID-19 in March—gave him a sort of encounter he’s not used to having.

He’d stopped at a gas station off the interstate in Mobile, Ala., and was in line at the Subway inside with his car sitting at the pump. A couple of football fans were there too and, in a weird, only-in-2020 twist, they were being sure to keep their distance.

“And I could tell the customers in front of me, they saw that I was the head coach. But then I could also tell there was this elephant in the room,” Payton said, laughing at the memory of it. “And I’m like, ‘Hey, I’m clear. I’m clean, I’m probably the safest person in here. But I do appreciate the concern.’”

Payton was fine then, weeks removed from having contracted the virus, and he’s fine now, as he and his staff work through what’s been a very different spring.

That said, the experience he’s been through has, as even those customers in that Subway could tell you, had a material effect on his offseason. From time to time, he’d have run-ins like the one in Mobile, where people were a little uneasy around him. Those have dissipated with time. He’s also done what he can to help those on the front lines.