Setting the Table for the Thanksgiving Day NFL Games (1 Viewer) 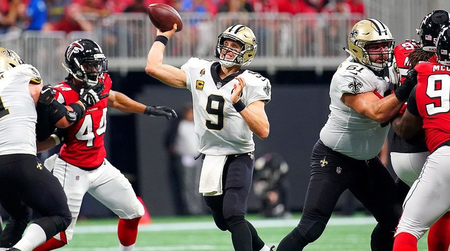 By The MMQB Staff

When these teams met back in Week 3, Alvin Kamara was targeted 20 times, an NFL single-game record for a running back. One way the Saints did this was by attacking Atlanta’s linebackers with wide receivers on deep crossing routes and then running Kamara on dumpoff routes underneath that. The Falcons must be prepared for that when they play zone coverage. When in man-to-man, they’ll consistently keep a safety or linebacker free in the shallow underneath part of the field, where he can easily double Kamara or Michael Thomas, both of whom are at their most dangerous when operating as receivers inside. Drew Brees can figure out if it’s man or zone before the snap by putting Kamara in motion and evaluating Atlanta’s reaction. Brees did this back in Week 3 and got the Falcons a few times on shrewd audibles.

Saints No. 1 corner Marshon Lattimore will likely travel with Julio Jones, but recall that in Week 3, Calvin Ridley lit up P.J. Williams and Ken Crawley for 138 yards and three touchdowns in little over a half. (He also drew a 45-yard pass interference.) Eventually the Saints moved Lattimore off of Jones and over to first-round rookie receiver. ...