Should Wrestlemania come to the Superdome (1 Viewer)

Offline
I look at Wrestlemania as the event that puts professional organized wrestling on the map, with Vince Mcmahon at the helm and promoting upteem numerous versions of the actual event since the mid 80's, but it has bothered me that the Superdome is never looked at as a place that could host the annual event. bu why not now? The Astrodome has been used as a host staduim for Wrestlemania in 2002, Ford Field is being used as a host staduim for next years Wretlemania, why not bring Wrestlemania to the Big Easy?

And why not use the Superdome as place to do it?
It would be worth it IMHO.

Offline
they have had some events at the superdome i think?

Offline
No, i really think you're on to something here.... i've always wondered why New Orleans can't ever host "The Camel Wrestling Championship" which usually takes place in Selcuk, Turkey in January each year.

Offline
Saintman, I think in the past it has had a lot to do with the deep south being NWA/WCW country. Obviously that's not so much the case anymore, especially with the WWE being pretty much the only game in town anymore for "major league" sports-entertainment.

When the WWF sold out the Pontiac Silverdome for Wrestlemania III (I think it was) there was no way they could have done that at a southern venue. The WWF was Yankee Rasslin', and though Hogan and Andre were household names, gentlemen of the south would have far preferred a nice Ric Flair vs. Dusty Rhodes game of human chess inside the squared circle.

A large part of the reason McMahon brought Jim Ross in from the NWA was to try to get a foot in the door re: the southern markets. Put a "southern face" on his shows, which to that point were far too "Minnesota" for southern fans, who at the time not only had the Georgia version of the NWA on Turner Networks, but also had very strong regional promotions such as Mid South, World Class Championship Wrestling and others as viable, more appealing options.

Jim Ross then successfully brought in plenty of southern in-ring talents such as Arn Anderson, Tully Blanchard, Ric Flair, Ted DiBiase, Michael PS Hayes, Jake Roberts, The Junkyard Dog [RIP] and Koko B. Ware to soften that hard northern edge created by guys like Jesse Ventura, Gorilla Monsoon, SD Special Delivery Jones, Barry Horowitz and Vince himself. They also eased up on their former tendency to ridicule the south constantly, through characters such as Hillbilly Jim. Over time this certainly worked, eventually peaking with hardcore southern Steve Austin dominating the company's product and southern fans jumping on board in droves.

Not coincidentally, Vince's Reaganesque arms race of southern talent played a large part in speeding the eventual fall of the last major superpower in the business, as southern fans embraced the Stamford, CT-based product as an appealing alternative. That's not to say WCW needed any help in ruining itself, but they helped anyway.

Unfortunately, with Austin's exit, WCW's demise and the resulting lack of a true breeding ground for Vince to acquire talent which appeals to the southern market, there is once again a paucity of true southern flavor to Vince's product. Vince doesn't know, and never really has known, how to create those NWA/WCW-style "southern rasslers." He has always acquired them from real southern promotions. Now that he has no choice but to create them, there aren't any. The Ric Flairs and Arn Andersons and other staples of the defunct NWA/WCW/WCCW/Mid South era have largely faded from the scene due to age. Flair is little more than a living fossil, the last lone remaining link to that time.

To a large extent, I believe that the southern market is once again distancing itself from the WWE. Many guys my age have stopped watching altogether, like I myself have. I can't even remember the last time I watched. Part of it is just growing up and growing out of the scene in general, but I can't say that I wouldn't still tune in from time to time, maybe even semi-regularly, if WCW were still around.

I don't have the numbers, so this is really maily just an educated guess, but I would bet that WWE management has statistics that suggest scheduling their flagship event at a large southern venue these days is not a smart thing to do at this time.

Offline
Don't turn your back on the Wolfpack. :rock:

Scott Hall is just Razor Ramone without a toothpick.

Chairman_LMAO said:
Don't turn your back on the Wolfpack. :rock:

That pic is of the NWO Outsiders.. Not of the Wolfpack.. The Wolfpack wore red and black.. 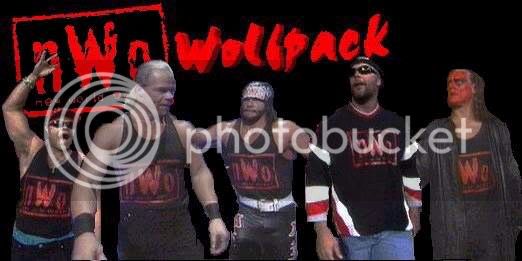 Scott Hall is just Razor Ramone without a toothpick.

I was watching some old MidSouth or Texas wrestling on late one night on ESPN.. They had Scott Hall on there before he was Razor Ramon or an Outsider.. He didn't have slicked back hair or anything.. Looked like a roided-out version of Magnum PI..

That pic is of the NWO Outsiders.. Not of the Wolfpack.. The Wolfpack wore red and black..

I'm well aware of the difference, thank you very much. And I am not ashamed of that.

Beast said:
I was watching some old MidSouth or Texas wrestling on late one night on ESPN.. They had Scott Hall on there before he was Razor Ramon or an Outsider.. He didn't have slicked back hair or anything.. Looked like a roided-out version of Magnum PI..
Click to expand...

Chairman_LMAO said:
Don't be a prick.

I'm well aware of the difference, thank you very much. And I am not ashamed of that.