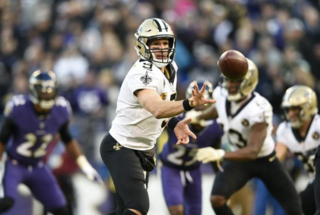 BY GUERRY SMITH | Special to The Advocate

While beating the Baltimore Ravens for the first time in his career on Sunday, Drew Brees accomplished something else he had never done.

He played his sixth consecutive game without throwing an interception, surpassing the previous single-season personal record of five he set in 2004 with San Diego and matched in 2011 with New Orleans. He remained the only NFL quarterback without a pick this year, extending his perfect string to 220 passes in the Saints’ 24-23 victory.

Coach Sean Payton did not want to talk about the streak for superstitious reasons, but he acknowledged its significance in the Saints’ 5-1 start.

Since joining the Saints in 2006, Brees never had thrown fewer than four interceptions in the first six games of a season, tossing 71 in 12 years with a high of 10 in 2007. But he began taking care of the ball better last season, throwing a Saints era-low eight interceptions. ...