Offline
I'm busy so please excuse the typos but here is an interview that was just conducted on Sirius 124 with David Patten. I did my best to catch all I could within the Q & A's.

Q: How happy are you to be back as a Saint?
A: Words can't express it... going into my 12th year and didn't really want to go prove myself elsewhere.

Q: How are you still doing it at 12 years?
A: Well if i were to take credit I would do the Lord a big discredit. I pride myself also on work ethic and my body.

Q: How much of your decision was staying with a team with a QB such as Drew Brees.
A: Thats 95% of the ball game. [Lots of laughs] I feel like if we give Brees more help then I think he'll move past the only two QBs ahead of him (Brady, P. Manning) and I only say that because of the success they've had as a team. I believe after the Saints get their wins he'll surpass them.

Q: How exciting is it to see the defense getting better from a offense perspective.
A: Oh very, they both compliment each other. Hopefully we can play more consistent now.

Q: Where is Reggie Bush's role in pro football.
A: He's a great talent, he just has to put it all together. I tell him all the time that you have to believe who you are and be that person. Expectations have been high and I think that downplays his success.

Q: Where is Deuce going to be?
A: Thats our hope and prayers he is the rock and foundation of our team. He carries so much respect from the players and staff. I haven't talked with him lately but he should come back good and fine


Q: What can you tell us about Marques Colston and how he is as a teammate?
A: If I had to say who was the next pro bowl player and hall of famer its him. He is the most dedicated and humbled player I've ever met. He missed the least amount of practices. The sky is the limit for him with his attitude and work ethic.

Q: If you were the GM of Saints what would you do with the 10th pick in the draft?
A: [reluctant] I will agree with you guys on going with the defense.

Q: Whats your opinion on bellicheck being called "bellicheat".
A: It makes me sick to my stomach, we had good people and a great team. With whats going on its absolutely crazy but I guess it is what it is when your king of the hill everyone wants to pull you down.

Q: How is that fanbase in New Orleans?
A: I tell you the fanbase here is 2nd to none... except the NE fans because of their success. These fans are just the same without that success the support is unbelievable.

Offline
good man, glad to have him back

Online
Thanks for taking the time to post this....

fwaokda said:
Q: How is that fanbase in New Orleans?
A: I tell you the fanbase here is 2nd to none... except the NE fans because of their success. These fans are just the same without that success the support is unbelievable.
Click to expand...

Glad to have you back man.

Offline
I am thrilled we kept him. This was a big one. Anything like this that helps us remain focused on improving the D is awesome. He's a quality guy with the type of experience our younger players need to be exposed to: Winning at the highest level and working hard late into his career.

Offline
Good guy; it's actually nice to hear him give some props to his fans from his NE days. That shows a loyalty that I like...he doesn't forget his fans, anywhere.

Loved what he said about Colston! We need to sign him for a 10+ year deal, LOL.

Offline
I am glad we re-signed him. He had 3 td's and over 700 yards.. thats getting you down the whole field 7 times and scoring three times (not exactly but figerativly speeking) I think he helped us win some games, when other players were helping us lose them!

Offline
The second offensive veteran to mention upgrading the defense...

iambruce said:
you left out the "mannnnn i tell ya" before every answer he gave
Click to expand...

doh! its on my clipboard I cut but didn't paste

Also thanks Scotlandsaint, good to see it was appreciated. 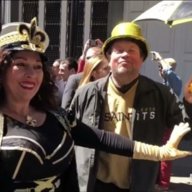 Offline
Appreciative of the Sirius transcript. Sounds like he's still a keeper. Like his attitude and team play. He's our #2 until Meachem or Henderson or another draft pick or signee can beat him out.